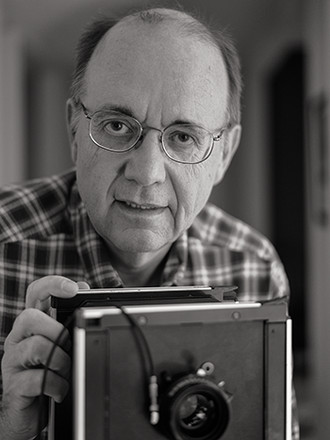 When Stephen Ashley was a young teenager, his family moved to a new town and rented a house with a bomb shelter in the basement. He discovered that when he turned off the lights, the bomb shelter was perfectly black. He realized that the bomb shelter would make an ideal darkroom, and he assembled one, using a Kodak slide projector as an enlarger. The light from the projector was so bright that it solarized the enlarging paper. Thus began his photographic avocation.

During his career he engaged in many occupations—fire fighter, typesetter, lawyer, writer, publisher, law professor, software developer, flight instructor—but all the while he honed his photographic skills. After a serious illness forced him to give up his law-related work, his retirement gave him the opportunity to devote his time to expanding his portfolio and to finding an audience for his work.

Mr. Ashley had no formal education in photography but learned from many teachers. In the 1970s and 1980s the University of California Extension programs at Berkeley and Santa Cruz offered a wide selection of short courses on various aspects of photography, and he enrolled in many of them. These courses gave him the opportunity to meet and learn from Stuart Scofield, Mark Citret, and others. He also had the good fortune to attend a Friends of Photography program, where he met Ruth Bernhard, Morley Baer, John Sexton, Marilyn Bridges, and William Christenberry. More recently, in May of 2014 he flew himself to Moab, Utah, to attend the Moab Photography Symposium, where he had an opportunity to photograph with Judith Zimmerman and Colleen Miniuk-Sperry. He attended the Symposium again in 2015 and worked with Bruce Hucko and Guy Tal.

Mr. Ashley counts Cedric Wright, Eliot Porter, Philip Hyde, and, of course, Ansel Adams as influences. Growing up he learned about fine art photography by studying the exquisite prints by these photographers contained in the Sierra Club Exhibit Format books.